The nature of endothelial cell (EC) adhesive interactions with extracellular matrix proteins conditions angiogenesis (blood vessel growth) and methods to engineer this interaction are critical for tissue engineering applications that aim to fashion designer blood vessels in bioengineered implants. In vivo, ECs secrete basement membrane (BM) proteins such as collagen IV and laminin, which creates a barrier between EC and stromal tissues that are composed mainly of structural proteins collagen I/III (Figure 1). When the BM becomes damaged or thinned due to injury, ECs come into contact with stromal tissue and angiogenesis is initiated as cells proliferate and local nascent blood vessels form (Figure 1).

In this study, SPR is used to probe the nature of EC interaction with the stromal type matrix protein collagen 1 and BM-type protein Matrigel®. Part I describes a simple and robust strategy to immobilize cells on SPR substrates and grow cell monolayers, EC osmotic stress response data are presented in Part II to assay the nature of the cellsubstrate adhesion.

Immobilization of ECs on the sensor substrate follows a three step protocol (Figure 2 a). Collagen 1 or Matrigel are immobilized in phase A. As seen, the SPR signal increase is four times greater for Matrigel compared to collagen 1, suggesting that matrix proteins at similar concentration and pH conditions can still be immobilized at different quantities based on their intrinsic physicochemical differences. In phase B, the ECs are captured from flow on the immobilized proteins at a flow rate of 5 μl/min. The SPR signal increase is 17-times higher for collagen 1 compared to Matrigel. When similar studies were performed at lower pH (=5.0), very high levels of collagen 1 (~5,000 μRIU) could be immobilized. However, EC capture was not efficient (data not shown). Overall, the extent of protein immobilization does not correlate with the efficiency of EC adhesion /capture. Cell and protein capture at physiological pH is optimal. In phase C, the captured cells were allowed to spread for 3 hours at a flow rate of 2 μl/min. Very little cell detachment was observed. Overnight culture of the ECs in normal cell culture medium resulted in comparable cell monolayers on both collagen 1 and Matrigel (Figure 2.b). Here, following cell culture, the gold chips were fixed using 4% formalin and stained with fluorescent DAPI (for nucleus) and phalloidin (for cytoskeleton). 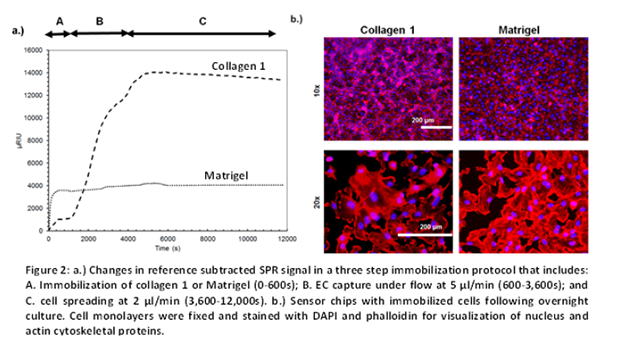 Overall, this experiment presents a robust strategy for the creation of confluent and uniform EC monolayers that mimic the physiological condition. These cell monolayers are used in Part II for osmolar shock-response studies.

SPR can be used to detect differences in the adhesive interactions of ECs to model extracellular matrix proteins. In this regard, cell attachment to surfaces and spreading are two distinct, independent events. Therefore, it is important to test the adhesive bond mechanically under shear, or by the introduction of osmotic pressure to measure the strength of adhesion. Surfaces where cells are more spread out will show greater decreases in SPR signal as cells shrink and become crenated. Figure 3.a shows the reference subtracted curve (Left-Right channel) for the hyperosmolar response of ECs after allowing cell spreading for 3 hours on the left channel. The right channel had only immobilized protein: collagen 1 or Matrigel. The decrease in SPR signal after the initial bulk shift is indicative of cell membrane retraction. Collagen 1 showed a signal decrease of ~5000 μRIU compared to a change < 1000 μRIU for Matrigel, suggesting that cell spreading is greater on stromal collagen 1. Reintroduction of isotonic HEPES allowed for SPR signal recovery. Subsequent hyperosmolar mannitol shock shows that the phenomenon can be repeated in a cyclical manner and that the cells do not fully recover each time as judged by the slope of the decreasing SPR signal becoming less negative each time. 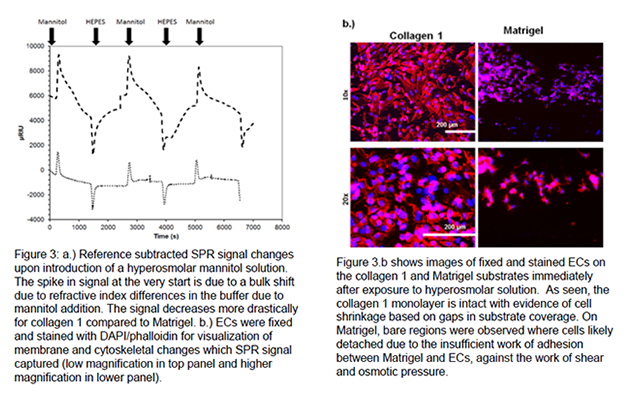 Using EQ. 1 we calculated the approximate Young's modulus of adhesion (E) of the cells to the substrate by measuring the difference in cell diameter before (d0) and after (Δd = df-d0) hyperosmolar shock (data in Fig 3.b), where R is the gas constant and T is the temperature in Kelvins [1].

We found that Young's modulus of adhesion to Matrigel was ~.5 MPa, while the strength of adhesion to collagen 1 was ~2 MPa, 4 times greater. These values are in the range of those found using atomic force microscopy (AFM) [1, 2]. These calculated differences correlated well with the SPR signal decrease which was about 5 times greater for Collagen 1 than Matrigel. Overall, these AFM observations are consistent with the measured SPR signal.

SPR is a versatile technique for quantifying the adhesive interaction of cells with model proteins. It enables the measurement of the relative strength of adhesive bonds, response to osmotic shock and related temporal data. Cell based SPR studies thus have enormous potential for medicine and biotechnology. In comparison to other competing technologies like atomic force microscopy, SPR measurements are more straightforward and costeffective and the measurements reflect the behavior of the average cell in a cell population (rather than individual cells). Reichert SPR systems provide the means to obtain these quantitative measurements by enabling ready manipulation of cell capture flow rates, detachment kinetics under defined shear stress, and studies of osmotic pressure perturbation. The studies show that EC adhesive interactions are greater with stromal collagen 1 proteins compared to Matrigel. These data are useful for the design of bioengineering strategies to study angiogenesis.

Integration of SPR with microscopy for simultaneous morphometric measurement of cell membrane-surface interaction will be helpful. Use of the Reichert quartz window flow cell for this research can further enable a wide variety of cell based studies.