This preliminary note involves the novel use of a Reichert SPR instrument to perform enrichment of phage antibodies using the fluidics system of the instrument. Phage antibody technology is a powerful method for obtaining specific antibodies directed at a defined target for a fraction of the time and cost of conventional monoclonal antibody technology. It was theorized that if phage encoding a binding partner for a target immobilized on a sensor slide could be separated from phage displaying non-binding proteins, then it would be possible to employ the precise fluidic controls of the instrument to perform enrichments under conditions that could prove beneficial in selecting affinity variants.

The Reichert SPR instrument was used with a Reichert planar mixed SAM sensor chip and PBST as the running buffer. Approximately 1500 μRIU of BSA was amine-coupled to the left channel only of a two channel instrument. Phage displaying either an anti-BSA antibody (single-chain Fc, scFv) or an anti-peptide scFv (negative control) that can be easily distinguished by a colony PCR procedure were prepared and injected onto the sensor chip. Phage were applied at a flow rate of 10 μl/min. After 10 minutes, the flow rate was increased to 50 μl/min and aliquots of the outflow were collected. After approximately 20 minutes of dissociation, remaining sample was eluted by injection of 20 mM HCl and additional fractions collected. Phages present in the fractions were recovered by transduction of E. coli and samples of colonies in each fraction were subjected to colony PCR. The products were resolved by agarose gel electrophoresis.

A summary of SPR and fractionation results are presented in Figures 1-3. 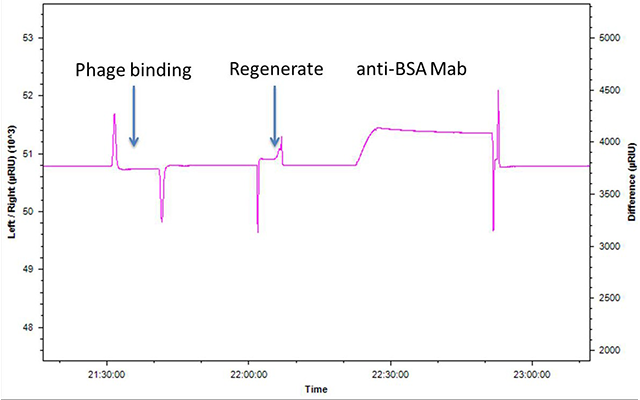 Figure 1. A total of about 1x10 to the 8th power phage consisting of roughly equal amounts of a BSA binder and a non-binding anti-peptide phage were injected. The delta SPR signal from the injection is shown here. After phage is flowed over the BSA target and dissociated, the material remaining bound material on the surface is removed by regeneration with 20 mM HCl. Anti-BSA Mab is then injected as a control to show the surface is still active..After dissociation, the surface is again regenerated with 20 mM HCl.

Figure 2. Pictorial with timing of the separation of BSA binder and non-binder phage.

Figure 3. Amounts of phage found in each titer of fractions is shown. Recovery is 1-5% when applying ~1x10 to the 8th power binding phage. Upper values at the bottom are for phage that bound, lower values are for negative control (these numbers indicate good specificity). Results clearly show a 10 to the 3rd power enrichment...with a non-optimized system.

Preliminary results indicate that phage can be easily applied, fractionated and recovered from the SPR outflow after elution.