Researchers at the University of Arizona are studying Protein Phosphatase 1 (PP1), an enzyme involved in over 50% of all dephosphorylation reactions in the human body. In this current study, researchers sought to better understand how the known regulatory protein SDS22 interacts with PP1, including how it can act as both an activator and an inhibitor of PP11. Researchers used a number of techniques, including Surface Plasmon Resonance (SPR), to determine how different conformations of PP1 affect its binding to SDS22. In particular, they used their Reichert 4SPR to help them better understand the role that metals play in the binding interaction.

Protein Phosphatase 1 (PP1) is a Ser/Thr Phosphoprotein Phosphatase (PPP) that is abundant in many living organisms, including humans. PP1 is a single domain enzyme. It can form holoenzymes (combinations of enzymes with coenzymes that are biochemically active) with > 200 regulatory proteins. Previous research has shown that the active sites of all PPPs bind 2 metal ions (M1 and M2) and that the identity of the metals is dependent on the host.1 For instance, in mammals, the M2 metal is Fe+2 and the M1 metal is Zn+2. In bacteria, M1 and M2 are both Mn+2.

One of the regulatory proteins of PP1 is SDS22, which has long been known, but whose interaction with PP1 has not been fully understood. In this work, cellular, biophysical, and crystallographic studies were used to provide more information about the PP1:SDS22 interaction. Using crystallography, researchers were able to show that SDS22 binds to a form of PP1 that was not known previously and in addition, they found out more about how it acts as an inhibitor. With SPR they were able to expand their knowledge of how the binding is carried out, including information on the kinetics of the interaction.

Researchers were interested in better understanding the role of SDS22 in relation to PP1. They also wanted to determine what role the PP1 metals (M1 and M2) play in the PP1:SDS22 interaction.

Using multiple techniques, researchers determined that SDS22 binds exclusively to metal deficient PP1 (PP1 with M2 only). To determine the mechanism, ie. whether SDS22 causes the loss of metal at the active site or binds PP1 after the metal has been lost, they used crystallography and surface plasmon resonance (SPR). Results indicated that SDS22 binds PP1 after the metal is lost.1 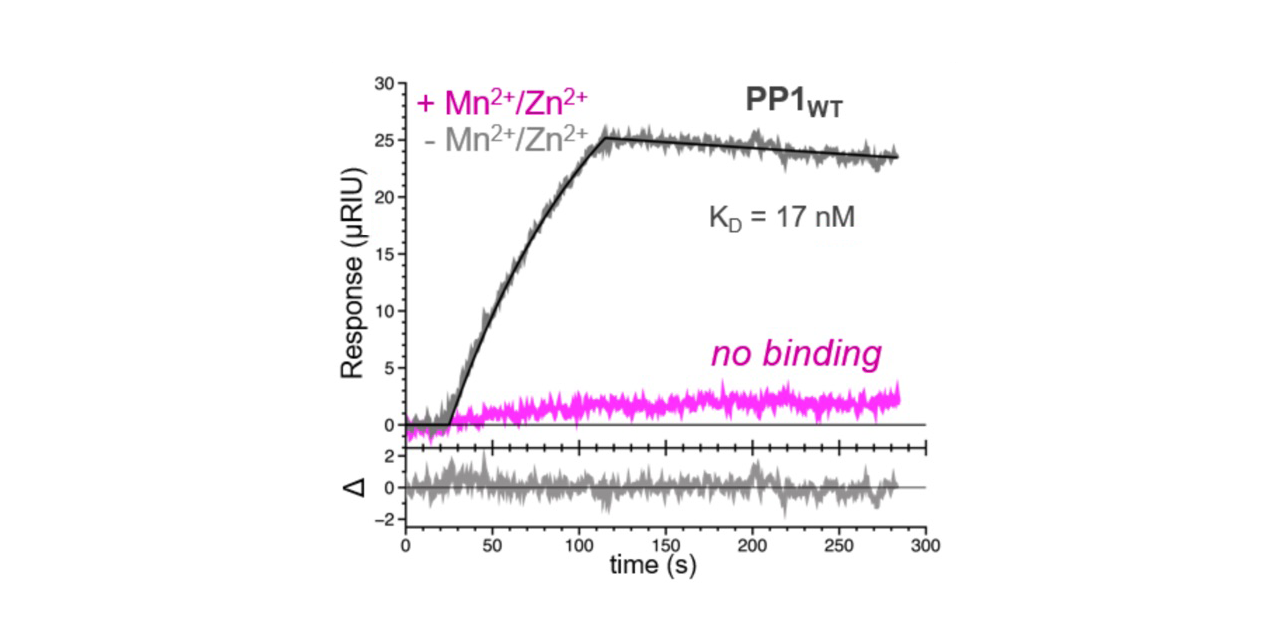 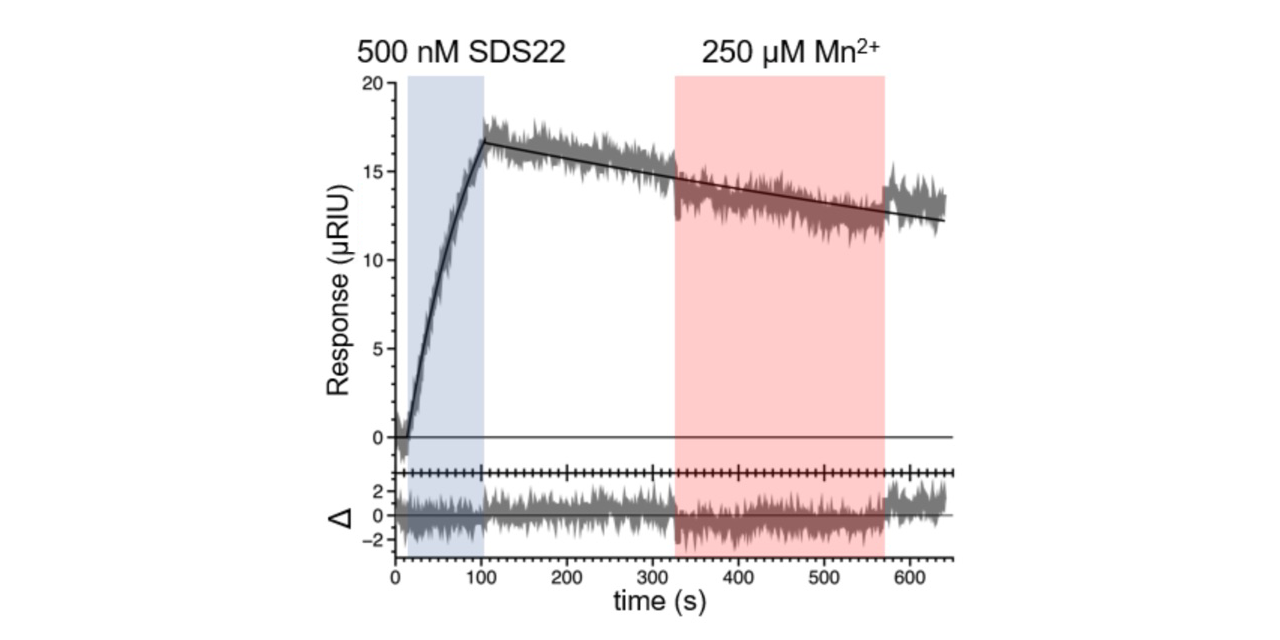 SPR experimental results showed that the interaction between SDS22 and PP1 lacking M1 is tight, with a KD of 16.9 ± 5.1 nM. While this value is similar to that obtained for other PP1 regulators, the interaction is not typical in that the association (on) and dissociation (off) rates are both slower. Along with data obtained using other techniques, researchers were able to conclude that the slower off rate helps SDS22 stabilize and trap the inactive metal-deficient conformation of PP11.

There was an additional question whether Mn+2 and SDS22 compete for binding to PP1. It was confirmed they do with approximately a 3.7 fold reduction in SDS22 binding in buffer containing Mn+2 (Figure 3).

Figure 2. Sensorgrams without and with manganese ion in the injected sample. Manganese was excluded from the running buffer.