Research involving surface modification has been an ongoing area of interest for many years and it impacts a variety of fields. Surface modification plays a critical role in fields as diverse as production of anti-fouling coatings to prevent protein adsorption, which affects tissure engineering, biosensors and blood control devices1; to “SMART” surfaces with on/off switchability resulting from outside stimulation by light2, heat, or electrochemical, chemical or mechanical triggers3, which relates to cell research and drug delivery. Gaining a better understanding of the modification process helps researchers optimize their modification approach.

Polymerization is one mode for layer by layer deposition onto a surface. The kinetically controlled self assembly of supramolecular polymers is a challenge, particularly when related to the surface confinement of dynamic supramolecular materials. The research outlined here involves the use of designed amphiphiles to prepare such materials4. Amphiphiles are compounds that are both hydrophilic (aqueous soluble) and lipophilic (fat soluble). Amphiphiles are synthetic or natural molecules that can self-assemble into various structures including micelles, vesicles, nanotubes, nanofibers, and lamellae5. Researchers in this study designed cationic and anionic dendritic peptide amphiphiles, using an alternating lysine-methionine or glutamic acid-methionine sequence4.

Surface plasmon resonance (SPR) is an attractive technique to monitor mass changes occurring on a gold-layered sensor chip. SPR can be used to follow the self-assembly process and/or polymerization of molecules on a gold surface in real-time. The researchers whose work is summarized here used Reichert’s SR7500DC surface plasmon resonance (SPR) system to follow both the layer upon layer adsorption of material to the surface as well as the desorption when acid and/or base was applied. Reichert’s SR7500C system also allows the user to vary the temperature of the sensor chip over a wide range and study its effect. By carrying out temperature dependent surface plasmon resonance (SPR) experiments, these researchers were able to elucidate the kinetic parameters that dictate the surface confined self-assembly, as well as the viscoelastic properties of the supramolecular copolymer that was produced4.

Researchers can vary functional groups on monomers to control how the molecules self- assemble on a surface. This affects the properties of the coatings that are produced including such things as wettability, anti-fouling capability and biocompatibility for cell adherence. For this study, oppositely charged methionine comonomers were chosen which become one-dimensional supramolecular copolymers via a combination of attractive Coulomb interactions, hydrogen bonding and hydrophobic shielding. Generally, both comonomers are able to bind to metal surfaces and can then act as initiated self- assembled monolayers4. Building on prior work6, researchers integrated N-terminal dendritic triethylene glycol chains into their monomers in order to obtain surface-confined copolymers that are much more water soluble and can be desorbed more conveniently after assembly4.

The first step in the process was to saturate bare gold chips with one monomer and then wait for a good baseline to be established. This saturated SPR response corresponds to a saturated self-assembled monolayer. Next, researchers alternated injections of positively and negatively charged monomers (seen as stepwise changes in refractive index in Figure 1) to form ordered polymer brushes on the surfaces. These brushes were very stable, and stayed kinetically trapped on the surface, even after flushing with near neutral phosphate buffer for more than 1 hour (seen as a refractive index plateau in Figure 1).

To study its effect, temperature was also varied (each temperature was run as a separate experiment). It was found that as temperature was increased, the SPR refractive index shift increased but in a non-linear manner (examples of results for 2 temperatures are shown in Figure 1). These results indicated to researchers that the temperature dependence is likely due to desolvation of the triethylene glycol chains at higher temperatures which would favor monomer interactions due to both a decrease in steric demand and an increase in hydrophobic shielding after desolvation of the hydration layer4. In addition, entropy-driven multivalent Coulomb interaction between oppositely charged monomers and the associated release of counterions would also be more dominant at higher temperatures and would increase the thermodynamic driving force for comonomer binding4. After responses stabilized, alternating washes of NaOH and HCl solutions were used to remove the brushes by quenching the intermolecular Coulomb interactions via protonation or deprotonation of the carboxylate or ammonium side chains. An example of a run at 30 degrees C is shown in Figure 2. 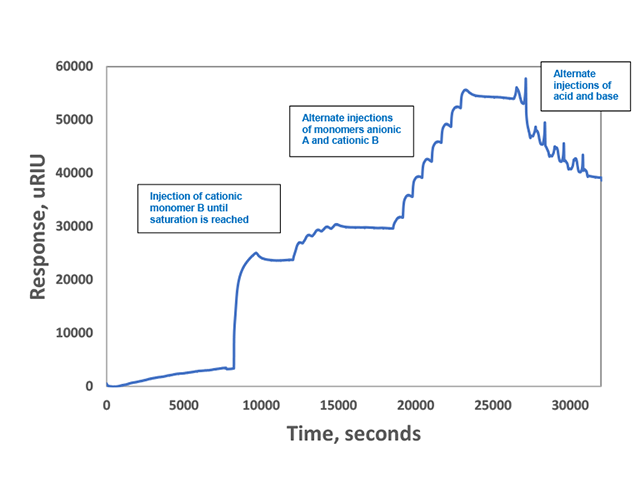