Treating a disease as complicated as malaria requires a team approach. Teams of researchers from around the world have been working for many years to determine the best way to combat this deadly disease. Malaria is most prevalent in tropical and subtropical parts of the world including Africa, the Middle East, Southeast Asia and Central and South America1. Development of a vaccine to prevent malarial disease and its transmission are seen as key components of the fight against the disease and its spread. However, finding the proper target for treatment has been complicated, especially since more than one type of parasite can be involved in transmission.

An integral step in malaria vaccine development has been to understand how infection by parasites occurs. Of the known human malaria parasites, the group whose research is highlighted here has targeted two - Plasmodium falciparum (P. falciparum)2, which is the most deadly parasite, and Plasmodium vivax (P. vivax)3 which is the most common parasite species that infects humans. A key question that needed to be answered early on is - How do parasites gain entry into red blood cells? This group discovered that P. vivax enters young red blood cells by making proteins that recognize and bind to receptors on the young red blood cell surface4. This family of proteins was structurally similar to those used by P. falciparum to infect red blood cells. The next step in their research effort was to determine the three- dimensional structure of the proteins. This determination showed that the proteins are folded in the same way with the main difference being in the electrical charge on the surface of the molecules4.

Once researchers worked out the structure of the proteins produced by malaria parasites and where the proteins are binding to their receptors, they started work on designing inhibitors that can potentially block parasite entry. To assess the binding characteristics of these potential inhibitors, researchers turned to surface plasmon resonance (SPR), an information-technique that can determine binding kinetics and affinities for a wide range of biomolecular interactions. This note presents results from a research group that utilized Reichert’s SR7500DC surface plasmon resonance (SPR) system to better define the binding interface of a key malaria protein with its receptor and to show that certain small proteins potentially could be used as soluble inhibitors to inhibit the parasite erythrocyte interaction. This information is an important starting point that will lead to further screening of potentially more powerful inhibitors and can aid in the rational development of a novel malaria vaccine.

Researchers found that P. falciparum reticulocyte binding protein-like homologue 4 (PfRh4) binds to complement receptor 1 (CR1 or CD35) to mediate entry of malaria parasites into human red blood cells2. CR1 (complement receptor 1) is composed of 28–30 structural modules (which are called complement control protein (CCP) domains) in the extracellular domain. The CR1 protein fragments in the study outlined here consisted of only two CCP domains and had molecular weights of around 14,000 Daltons. Initial mapping studies identified the first two to three N-terminal modules of CR1 (CCPs 1-2 or CCPs 1–3) as specific inhibitors of the PfRh4-CR1 invasion pathway2. Seven different mutant proteins were tested for their inhibitory potential via SPR. SPR was able to rank them in terms of affinity with three having the highest affinity for the intended target. The SPR results matched with the expected biological activity determined independently with other techniques2.

Binding affinities for a series of protein fragments to PfRh4 were determined. An example of responses from one of the higher affinity fragments is show here (CR1 CCP 1-2). Data is fit to a 1:1 binding model with mass transport model: 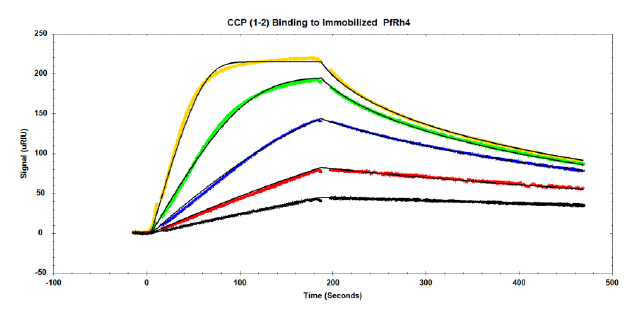