The application of Surface Plasmon Resonance (SPR) for cell based assays is an emerging research theme. The accessible and easy to change tubing (typical i.d. values ranging from 0.005-0.04" (125-1000 μm)) and ability to change flow rate over a wide range (0.1 μL/min to 3 mL/min) makes Reichert SPR instruments particularly well suited for cell studies. This application note demonstrates the use of the Reichert 2SPR instrument to measure the binding of white blood cells or leukocytes (analyte) to substrates bearing P-selectin (target). Commonly, such molecular binding occurs at sites of inflammation where carbohydrate ligands expressed on the leukocyte surface bind selectins expressed on the inflamed vessel wall (see figure below). This enables leukocyte recruitment at sites of inflammation, and the same process is also important during normal physiological immunity. 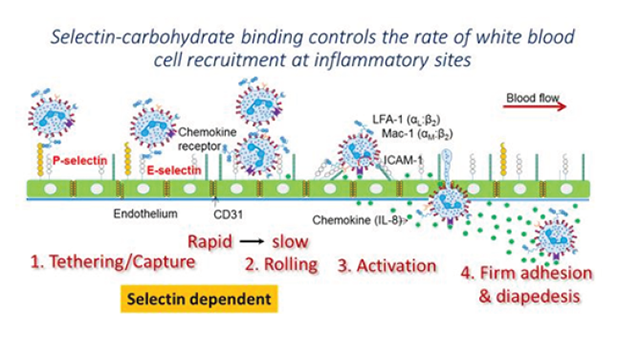 Anti-human IgG (MW 150 kDa, concentration 80μg/mL in pH 6.0 acetate buffer) was amine coupled to the left channel only by injecting for 10 minutes at a flow rate of 15 μL/min after EDC/NHS activation. Baseline increased by 200-250 μRIU. Recombinant P-selectin-Fc (5μg/mL; 10 min. capture at 15μL/min.; 240KDa) was then immobilized on the left channel to ~400 μRIU. This protein contains the N-terminal lectin binding domain of P-selectin fused to a human IgG1 Fc tail. Such immobilization is consistent with 1:1 antibody:protein capture interaction. Both channels were blocked with 2% BSA (Bovine Serum Albumin). Subsequently, 107/ /mL human leukocyte HL-60 cells were perfused in both channels at 50 μL/min.

Blocking studies were performed in some runs by incubating HL-60 cells with a blocking monoclonal antibody KPL-1 that binds the N-terminal portion of the glycoprotein ligand PSGL-1 (CD162, P-selectin glycoprotein ligand-1). This is the major ligand binding epitope of P-selectin on the human leukocytes.

In other controls, the substrates contained a fusion protein called 19Fc, an irrelevant IgG1 fusion protein similar in all aspects to P-selectin-Fc except that the lectin-domain of selectins is replaced by 19 amino acids.

Cell capture is noted in the left but not right channel in Fig. 1. Cell adhesion to immobilized P-selectin was prevented by the addition of the blocking antibody KPL-1 (inset to Figure 1). 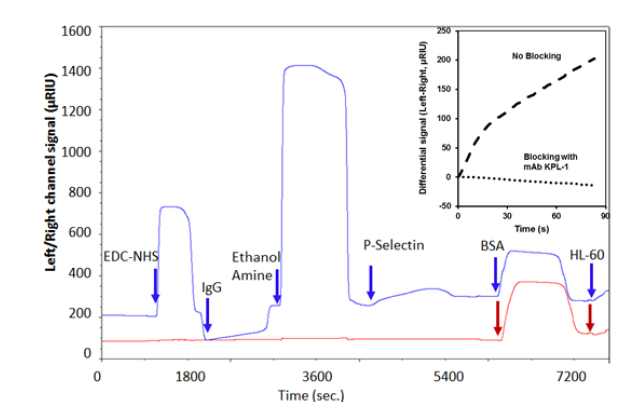 Figure 1. Sensorgram shows the coupling of P-selectin onto the sensor substrate and subsequent capture of leukocytes on the left channel (blue). There is minimal signal change in the right channel upon cell pefusion (red). Insert shows cell binding data (left-right channel differential signal) from two runs with and without the anti-PGSL-1 blocking mAb KPL-1. 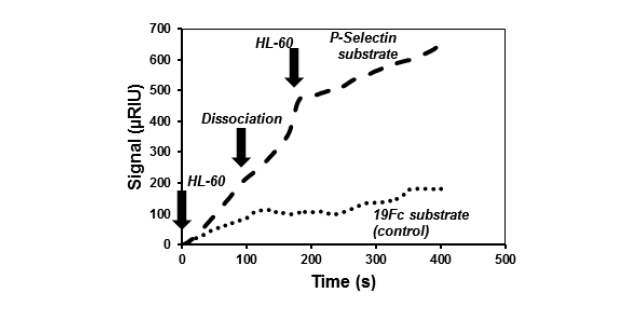 Figure 2. Specificity - Left channel contained immobilized P-selectin-Fc and right channel contained immobilized 19-Fc. Specific binding was noted in the left channel only. Absolute signal for both channels is shown. Two cycles of cell binding were conducted with a dissociation step of between 90 and 180s. Cell binding slope was non-zero during the dissociation phase, presumably due to the spreading of cells after initial contact. Cell binding signal was ~ 2 times higher in the first biding cycle due to the availability of more unbound ligand (P-selectin).