What is a biosensor?

A biosensor is a device which uses a mixture of biological and physicochemical components to detect molecular-level interactions. Essentially, biosensors detect the change in physical properties which occur when an immobilised biological molecule, such as an antibody or a protein, binds to their target analyte.

A number of methods have been developed to determine interactions between bioreceptors and their analytes, many of which are based on the principle of Surface Plasmon Resonance, or SPR. The ubiquity of SPR comes from its inherent advantages; it allows real time, highly sensitive monitoring of a wide range of molecular interactions, without the requirement for additional labelling of samples.

Surface Plasmon Resonance is caused by the interaction of electromagnetic radiation and the free-flowing cloud of electrons within a metal, a process which induces electromagnetic waves and, under certain conditions, resonance effects. Alterations in the physical conditions at the surface have a significant effect on this resonance, and the detection of these changes form the basis of the SPR biosensor.

The initial phase of SPR requires the formation of an evanescent field at the sensor surface. Evanescent fields, characterised by exponential intensity decay, are generated when light undergoes total internal reflection at a boundary between two substances of differing refractive index, for example glass and air. Total internal reflection occurs when all of the inbound light is reflected from this interface, and usually occurs at shallow reflective angles. Although all of the photons are reflected from the interface, part of the electromagnetic field component will penetrate through to create an electromagnetic evanescent field.

If the incoming light is p-polarised, occurring at a certain wavelength and angle, the evanescent field will induce the formation of surface plasmon polaritons – electromagnetic waves travelling within the free electrons of a thin metal film (usually gold). Energy from the photons must be diverted to create these waves, and so the intensity of the reflected light will be dramatically decreased. Thus the ‘SPR angle’, the angle at which SPR waves are induced, is associated with a sharp ‘dip’ or decrease in reflected light intensity.

Surface plasmons which occur at the interface between a metal and a dielectric material contain both electromagnetic wave and surface charge characteristics. The combination of these characters affects the surface-perpendicular component of the electric field, causing enhancement near the surface, but exponential decay as one moves further and further away. The field in this perpendicular direction is said to be evanescent, reflecting the bound, non-radiative nature of surface plasmons. In the sample buffer above the metal, the decay length of the field (d), is approximately half the wavelength of the light involved. This decay length is usually defined as the distance over which the intensity of the evanescent field drops to 1/e, approximately 37% of initial intensity.

The majority of commercial instruments utilise light with a wavelength between 600 and 800 nm, and thus d is in the range of 300 – 400 nm. The value of the SPR angle is dependent on the refractive index of the surface and its immediate surrounds, up to a distance of approximately several hundred nanometres. This refractive index will alter as macromolecules adsorb to the surface, in turn altering the angle at which SPR occurs. As there is a linear relationship between the amount of surface-bound material and the change in SPR angle, this can be used to calculate the amount of analyte bound to the surface.

SPR biosensors work measure alterations in the SPR angle as a sample passes over and analyte molecules bind to immobilized ligands at or close to the sensor surface. One important consequence of the exponential decay of the evanescent field is that a typical SPR biosensor is unable to detect events beyond 600 nm from the sensor chip surface. The high signal-to-noise ratios achievable with evanescent field sensors are partially due to this relative insensitivity towards changes in the sample bulk. In addition, identical interactions at differing distances from the sensor surface will give rise to different signal shifts. Thus a receptor-ligand binding event (or indeed non-specific interactions) within 10 nm of the metal surface will result in an almost three times greater response than the same process at 300 nm distance. 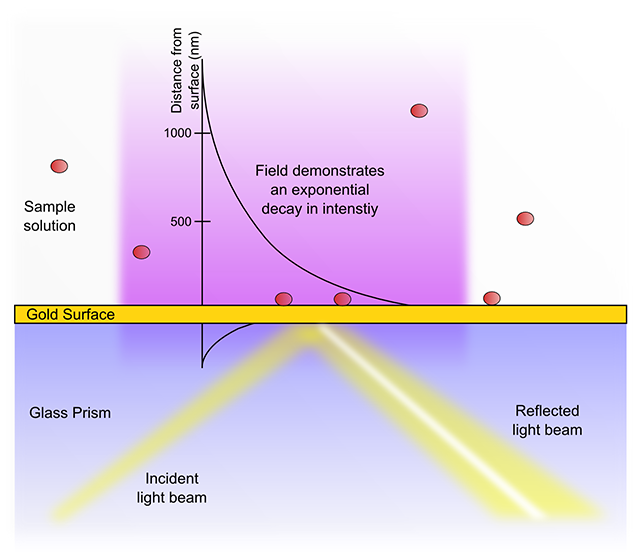 Different coatings on the sensor chip allow adaptation of the sensor to different ligand/analyte systems, and so allow the ‘tuning’ of the detector. The potential ligands which can be coupled to various surfaces, and thus the detectable analytes, are effectively unlimited – and so SPR biosensors have been used to analyse binding of samples ranging from small proteins through to entire cells. As the method works in real time, successive sample and buffer injections can be used to calculate properties such as association and dissociation rate constants – and from these the affinity constant (Ka) can be determined.

The degree by which the SPR angle changes as a function of the change in refractive index is dependent on the light wavelength and the sensor chip itself. Thus comparison of results between different protocols requires calculation of the overall refractive index change (in µRIU) from the measured SPR angle shift (in millidegrees). Alternative units such as resonance units (RU), which are apparent and not related to SI units, are also in use.

The sensitivity of SPR to changes in surface conditions also provides several of its limitations.
Firstly, changes in refractive index are proportional to the molecular weight of the analyte binding to the surface. In practice, compounds with a molecular weight below 200 Dalton require sensor chips with very high ligand binding capacity (such as XanTec’s C200d or HC1000m) to provide sufficient material for detection.

Secondly, the exponential decay of the evanescent field provides an upper bound to the size of analytes which can be studied. The above mentioned decay length of the field (d) of 300 – 400nm means that particles larger than 400nm do not cause a linear change in refractive index as they bind. In these situations qualitative studies can still be performed, but quantitative or kinetic analysis cannot.

Finally, large-scale changes in the refractive index of the system will also affect the micro-scale measurements used in SPR – these changes are often associated with temperature changes in the environment. Fortunately almost all modern instruments are able to control for these changes via the use of referencing systems.